Back to the Year in Review.
In March I took the kids to "Grandma and Grandpa with the Pond" in Bancroft, so I could use their wonderful laundry room to dye t-shirts for the kid's school; for them to use as 'uniforms' during sports games. In the end, I had to do some at home in the washing machine, and I think they worked better and were certainly less tiring than standing in front of a sink, stirring heavy wet cotton shirts with a big stick. 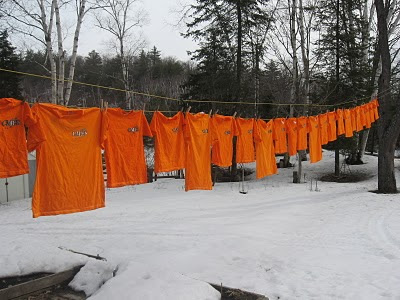 The kids' school has a monthly assembly and every month they acknowledge a certain character trait that they want to encourage. They try to work it so that every child gets at least one 'award' at some point through the year. As well, they give awards to children that either have significant improvement in core subjects, or a B average in core subjects on their report cards. During March, both Lucy and Huey got awards. 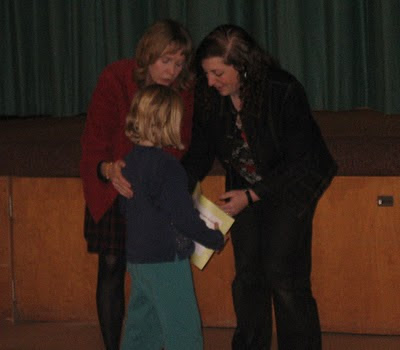 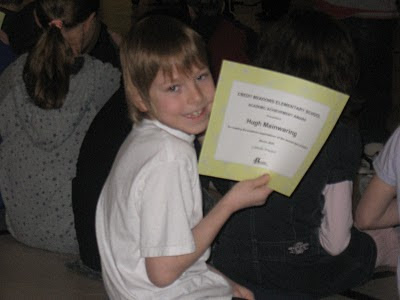 Hugh also got a piece of artwork put on display, in the FRONT hall of the school! It was made in early fall, and was to be a self-portrait, without the use of scissors. Huey had been wearing a Spiderman t-shirt that day. The art was taken down before the end of school and an email to the principal asking if we could get it back went unanswered :( 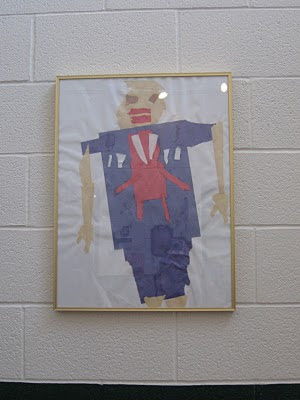 Buster, the dog, is obviously very fond of a particular spot on the loveseat at Grandma's. Although she looks ....dead? Meg was actually asleep and didn't notice Buster trying to get comfy. 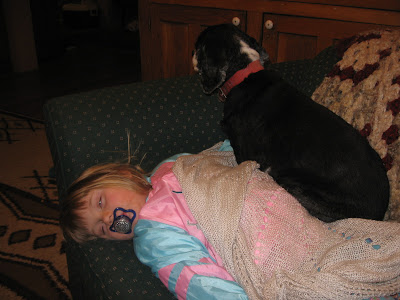 We waited patiently through March about Rob's job interview at OPG. They had said they'd know by mid-March, and finally on March 26 (the interview was Feb 10), they offered the job to him! They said security clearance could take 6-8 weeks, so we set a tentative start date of early June. I started planning a family party for early June too, LOL. We had our real estate agent come over, and boy, was she surprised to hear from us! We had been in the house for less than 3 years, and it had taken over 3 years to find it! She was not optimistic about the housing market, but we felt that if needed, we could hold on, as Rob could live with his parents. We wanted the kids to finish school in Orangeville anyway, and we thought maybe we could spend the summer in Bancroft, leaving our house empty and pristine, for showings. There was no rush, as technically, Rob didn't actually have the job yet! But we re-did the kitchen floor and our agent recommended someone for the carpeting. He came and did an estimate, and mentioned he was also a real estate agent. Rob asked him how much our house was worth, which threw him off guard a little, LOL. He came back for another walk through with his agent's hat on, and prepared some comparables for us. But really, we didn't like him as much as our agent that we had been using since Sept. 2002. Stay tuned for more real estate/new job sagas!

Posted by TracyKM at 1:19 PM No comments: Links to this post

This blog has been delayed due to technical difficulties!
I decided after starting the 2009 year in review, that I would upload the photos in reverse order so that when Blogger puts them in the working window, they would be in the right order. However, at about the same time, I started a massive re-arrangements of my photos. When we first started using digital photography, I wasn't sure how I wanted them organized. I made separate folders for each of the kids, one for the family, and then added folders for particular events...but then I'd be faced with the question...does this go in Meg's folder, or the family folder? Etc. I decided a couple months ago to just keep my knitting/sewing etc pictures separate and start just using the monthly folders. Then I had to go back through the other folders, and make many new ones, to put the old pictures into the correct month. To add to the difficulty, when we transferred the pictures from our old computer to this one in Nov. 07, most of those pictures did not keep their 'taken on' date info. Some pictures I had dated as their file name, some were of particular events and I could easily remember the month, but there were some that were too general---Huey in the sprinkler at Grandma's.
And then...Rob decided to 'optimize' the computer's viewing system and now all the pictures show up as photo icons instead of the actual photo thumbnail. And since I stopped naming most pictures, I have to open each picture to find out what it is.

So, until we get that sorted out, just keep up with me on Facebook, LOL.
Posted by TracyKM at 1:03 PM No comments: Links to this post 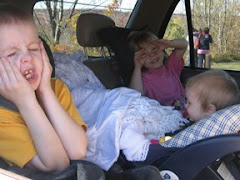